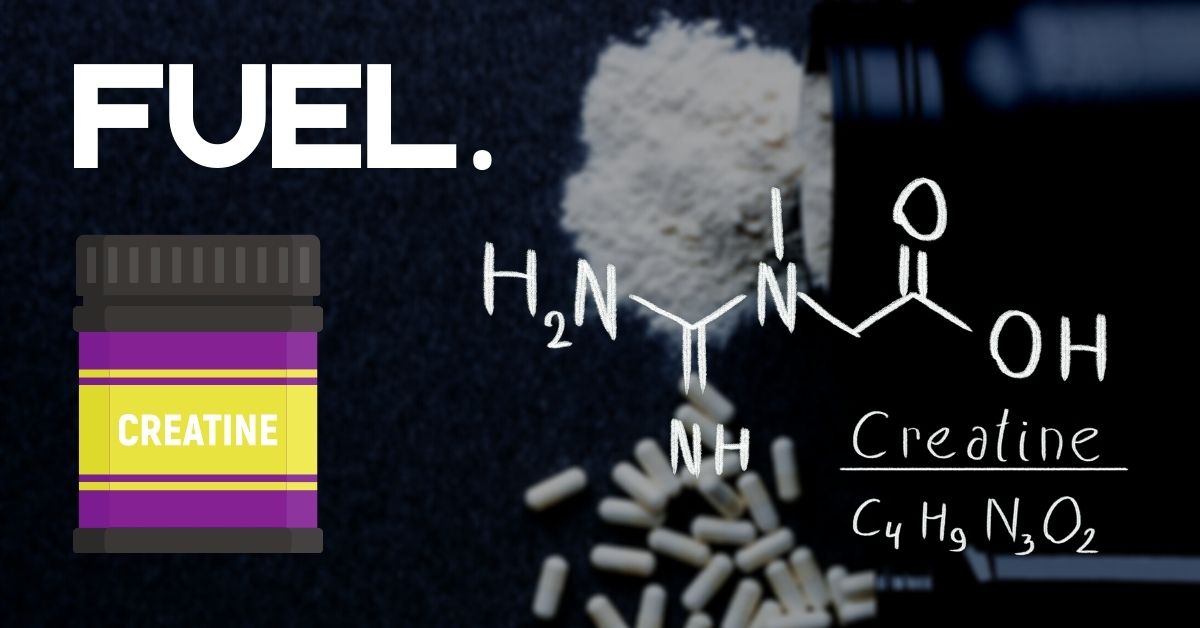 Creatine monohydrate is one of the most popular and extensively studied supplements used by athletes due to its ability to increase intramuscular creatine concentrations, improve exercise performance and enhance adaptations to training (Kreider et al., 2017). 95% of the human body’s creatine stores are found within muscle while the remaining 5% exists in the liver, kidney, and testes (Persky and Brazeau, 2001). Creatine is found in protein sources such as meat, poultry, and fish with the average individual consuming ~1-2g of creatine per day from their diet. However, this amount of dietary creatine only saturates the muscles creatine stores by 60-80%. Therefore, creatine supplementation is needed to further saturate creatine stores with the potential to increase intramuscular creatine stores by 20-40% (Andres et al., 2017).

Why should you supplement with creatine?

Adenosine triphosphate (ATP) is the body’s energy currency for processes such as muscle contraction. ATP is not stored in large amounts within the body. Therefore, once exercise begins and your muscles begin repeatedly contracting, the demand for ATP production increases. When the energy demand of performance is high (e.g. when high intensity work is required), creatine (specifically phosphocreatine) is needed to produce ATP at high rates (Butts et al., 2018). Increasing intramuscular creatine concentrations by means of supplementation facilitates faster resynthesis and production of ATP, ultimately delaying fatigue.

Aside from improving the mechanism of high intensity energy production, there are other reported benefits of creatine supplementation. Creatine has also been shown to increase lean body mass when combined with training, making this a suitable supplement for ALL athletes. By improving an individual’s ability to train harder at high intensities, athletes will be better able to promote greater training adaptations. Such adaptations include muscular strength and hypertrophy due to an increase in the expression of enzymes responsible for muscle contraction (Budford et al., 2007). Long term studies by Kirksey et al., (1999) and Noonan et al., (1998) have demonstrated that those who supplement with creatine elicit greater gains in lean mass by ~50% when compared to placebo groups.

One of the main issues experienced by athletes during periods of inactivity resulting from injury is a loss in muscle mass. This is another instance where creatine comes into action. Hespel et al., (2001) demonstrated that the recovery of muscle mass following a period of immobilisation was enhanced when creatine was supplemented during rehabilitation to a greater extent than those who were given a placebo. By enhancing muscle mass recovery, the subsequent strength gains that can be made during a rehabilitation programme are increased. There is also some research which suggests creatine supplementation can be used to lessen muscle atrophy during periods of immobilization. However, this effect has not yet been fully explored.

How much creatine should you take?

Following the advice given by the International Olympic Committee, typical creatine supplementation protocols begin with a ‘loading phase’. The loading phase consists of consuming 20g of creatine per day in 4 equal doses e.g. 5g at breakfast, lunch, dinner, and pre-bed. There is evidence to suggest that consuming creatine with a mixed protein and carbohydrate meal can enhance the bioavailability of creatine. Therefore, taking creatine at meal times may be the most optimal approach. A loading protocol should be followed for 5-7 days to saturate creatine stores. Following this, a maintenance dose of 3-5g per day is needed to maintain creatine stores (Maughan et al., 2018). If supplementation is stopped it can take between 4-6 weeks for the muscles creatine stores to return to baseline (Kreider et al., 2017)

Will everyone benefit to the same extent from creatine supplementation?

Are there any side effects of creatine supplementation?

There are no known health implications when supplementing with creatine long term (up to 4 years). However, acute symptoms such as gut discomfort may occur during the initial stages of supplementation. By splitting the loading dose into 4 smaller doses this should aid in minimising such symptoms. Athletes may also experience bloating as a result of water retention. This could lead to acute weight gain of 1-2kg. This is an important consideration for athletes who take part in sports where performance is sensitive to body mass. For example, endurance events, combat sports where athletes are required to fit into specific weight categories, and events where body mass must be moved against gravity (e.g. high jump) (Maughan et al., 2018).

This does not mean these athletes should ignore the use of creatine supplementation as it still has the potential to induce performance gains. However, the athletic populations mentioned may want to follow a supplementation protocol that is periodised in line with competition. For example, stop the use of creatine in the weeks leading up to weigh-ins/important competitions. Water retention may also be minimised by avoiding the initial loading phase. If an athlete chooses to do so they could maintain a consistent dose of 5g per day at the onset of supplementation. However, this method would lead to a more gradual increase in creatine stores and have less of a beneficial effect on performance until creatine stores are fully saturated. This may take several weeks vs 5-7 days when a loading phase is implemented (Maughan et al., 2018).

This site uses Akismet to reduce spam. Learn how your comment data is processed.

We use cookies on our website to give you the most relevant experience by remembering your preferences and repeat visits. By clicking “Accept All”, you consent to the use of ALL the cookies. However, you may visit "Cookie Settings" to provide a controlled consent.
Cookie SettingsAccept All
Manage consent

This website uses cookies to improve your experience while you navigate through the website. Out of these, the cookies that are categorized as necessary are stored on your browser as they are essential for the working of basic functionalities of the website. We also use third-party cookies that help us analyze and understand how you use this website. These cookies will be stored in your browser only with your consent. You also have the option to opt-out of these cookies. But opting out of some of these cookies may affect your browsing experience.
Necessary Always Enabled
Necessary cookies are absolutely essential for the website to function properly. These cookies ensure basic functionalities and security features of the website, anonymously.
Functional
Functional cookies help to perform certain functionalities like sharing the content of the website on social media platforms, collect feedbacks, and other third-party features.
Performance
Performance cookies are used to understand and analyze the key performance indexes of the website which helps in delivering a better user experience for the visitors.
Analytics
Analytical cookies are used to understand how visitors interact with the website. These cookies help provide information on metrics the number of visitors, bounce rate, traffic source, etc.
Advertisement
Advertisement cookies are used to provide visitors with relevant ads and marketing campaigns. These cookies track visitors across websites and collect information to provide customized ads.
Others
Other uncategorized cookies are those that are being analyzed and have not been classified into a category as yet.
SAVE & ACCEPT