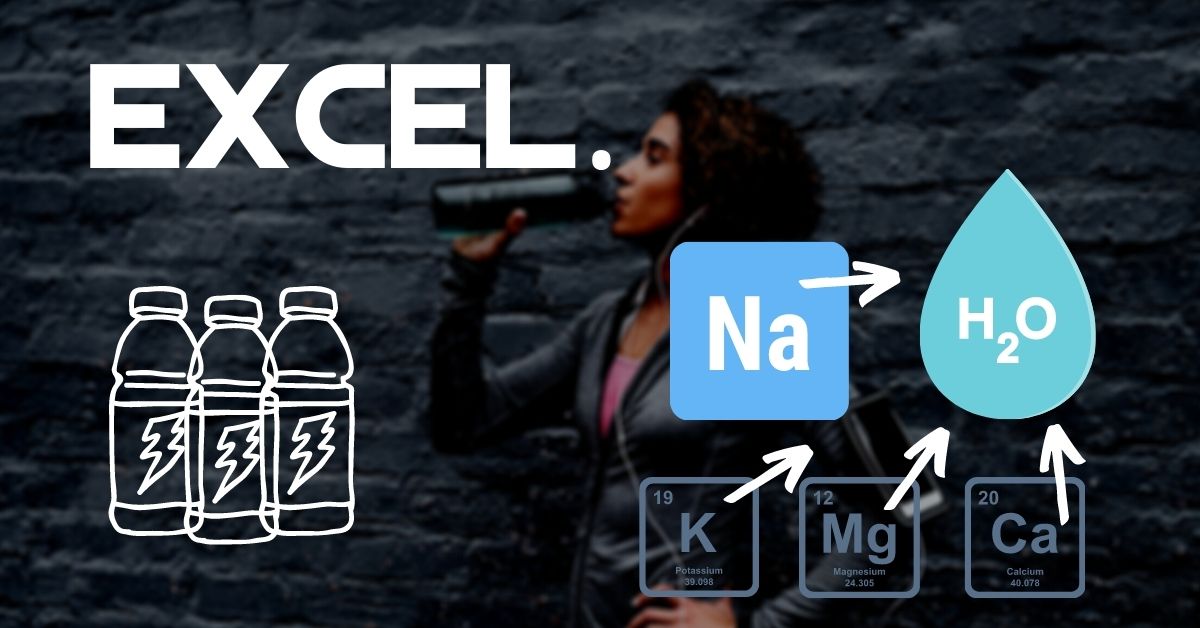 Excel: Iso-Plus; the supplement you need to know about

What is Iso Plus?

Iso Plus is an isotonic drink enriched with L-Carnitine, L-Glutamine, and vitamins C, B6 and B12. Isotonic supplements are extremely popular amongst competitive athletes with a study by Fraczek et al., (2016) showing that isotonic solutions had the highest prevalence of consistent use amongst a group of competitive athletes. The popularity of these supplements is due to the role they play in maintaining hydration status, and replacing electrolytes, carbohydrates, and other nutrients which are lost during training/competition (Orrù et al., 2018).

Why should you supplement with Iso Plus?

One concern in sport that is universal, irrespective of sport or discipline, is the negative implications dehydration can have on exercise performance. During exercise, the use of energy to perform a given task leads to an increase in body temperature. To cope with this increase in body temperate, our bodies begin to sweat which then evaporates off the skin, removing excess heat, allowing the body to cool down (Casa et al., 2019). Factors that affect an individual’s sweat rate includes, body mass, exercise intensity, exercise duration, the environment (e.g. higher sweat rates in hotter climates) and the athlete’s clothing (Casa et al., 2019).

A higher sweating rate is associated with a greater loss of electrolytes (sodium, potassium, calcium, and magnesium) and an increased risk of dehydration. Electrolytes are electrically charged minerals that are needed to maintain proper functioning of the nervous system, maintain muscle contraction, and to avoid muscling cramping and exhaustion (Shrimanker and Bhattarai, 2020, Colakoglu et al., 2016). Therefore, replenishing the electrolytes, lost due to sweating, is essential to sustain optimal performance levels. It has been consistently documented that when an athlete is dehydrated by 2% of their body weight performance impairements such as a reduced aerobic capacity, diminished cognitive performance, fatigue, and an increased risk of heat related illnesses can occur (Cheuvront et al., 2011). For example, for a 70kg athlete, this would be a drop in body mass of 1.4kg.

Therefore, an effective hydration strategy is needed by athletes to avoid these performance detriments. Iso Plus is the perfect intra workout drink as it contains electrolytes to replace those that are lost during exercise. This solution also contains a high glycemic source of carbohydrates which are quickly absorbed to avoid gut discomfort during exercise. The addition of carbohydrates in this solution can enhance the absorption of water in the intestines (Orrù et al., 2018).

The Role of Amino Acids in Iso Plus

Iso Plus is a well-rounded supplement as it also contains amino acids, namely L-Carnitine and L-Glutamine. Glutamine and carnitine have both been found to support immune function and improve recovery (Newsholme et al., 2011, Karlic and Lohninger, 2004). Additionally, Glutamine has been reported to positively influence gut function and attenuate losses in lean muscle mass (Newsholme et al., 2011). There is evidence to suggest that glutamine supplementation can delay the onset of fatigue by stimulating fluid and electrolyte uptake to avoid dehydration (Hoffman et al., 2010). There is also some early research to suggest that the combination of glutamine with carbohydrates could aid in recovery by promoting the resynthesis of glycogen following exercise via increased insulin production. However, the research is not conclusive, and more studies are required (Newsholme et al., 2011).

The Role of Vitamins in Iso Plus

Iso Plus is formulated to give you 20% of the average adults reference intake of vitamins C, B6 and B12. These 3 vitamins are among those most commonly deficient in an athlete’s diet (Rodriguez et al., 2009). Therefore, Iso Plus is not only an effective addition to your intra workout hydration regimen, but it will also contribute to energy metabolism and general health. Dietary sources of vitamin C include citrus fruits, such as oranges and green vegetables like broccoli and spinach. Vitamin C plays an important role in cell protection and in promoting the health of bones and blood vessels (Carr and Magginni, 2017). The vitamin B complexes promote healthy brain function and cell metabolism, and directly influence energy levels (Hellman and Mooney, 2010, O’Leary and Samman, 2010). The B vitamins are mainly found in protein sources such as meat, poultry, eggs, and legumes. It is important to remember that the inclusion of dietary sources of micronutrients are essential to reach the total recommended intake of vitamins to maintain optimal health.

How much Iso Plus should you take and who will benefit from supplementation?

This is a versatile supplement that can be used across a wide range of sporting activities. As previously mentioned, dehydration can have negative impacts on performance in all disciplines. Therefore, Iso Plus can be integrated into all athlete’s supplementation programme to support rehydration. However, it is important to remember there is a high degree of variability between individuals when it comes to the risk of dehydration due to the numerous factors that influence individual sweat rates. It needs to be understood that the amount of fluid/electrolytes, that are needed to replenish what is lost during exercise, will differ from person to person and hydration strategies should be designed with this in mind.

One dose of Iso Plus (17.5g mixed with 250ml of water) will provide you with 15g of carbohydrates, 50mg of L-Carnitine, 192mg of L-Glutamine, and electrolytes (sodium, potassium, calcium, and magnesium). Whether you take 1 or 2 doses of Iso Plus depends on the duration of exercise performance. For high intensity sports, lasting between 45-75 minutes, 1 dose of Iso Plus (15g of carbohydrates) can delay the effects of fatigue by providing the muscles with a fast-acting fuel source when muscle glycogen stores become depleted. A double dose of Iso Plus could be used for sports lasting 1-2.5 hours to provide 30g of carbohydrates (Burke et al., 2011) as this has been consistently reported as an effective strategy to sustain exercise performance.

Players from team sports and endurance athletes may specifically benefit from Iso Plus supplementation due to the containment of fast-acting, easily digestible carbohydrates. Think of Iso Plus as an energy boost at half-time during a football match or a means of maintaining your race pace during a 20km run. During these types of events, carbohydrates (in the form of glucose and glycogen) are the main source of fuel that is used by the body to produce energy. Once exercise commences, glycogen begins to deplete. The degree of glycogen depletion will depend on the duration and intensity of exercise. E.g. long lasting (road cycling) or high intensity intermittent (tennis) exercise will deplete glycogen to a greater extent than low intensity exercise (Hearris et al., 2018). As muscle glycogen stores become depleted, the body is unable to match energy supply with energy demand, leading to detriments in performance and ultimately fatigue. By providing carbohydrates intra-workout, muscle glycogen is spared for later use and low glucose concentrations in the blood stream are prevented, thus minimising the negative effects this can have on the nervous system (Burke et al., 2011).

In summary, Iso Plus is a universal product with a host of benefits. It can be used to replace electrolytes lost through sweating, maintain fluid balance to avoid dehydration, contribute to general health and energy metabolism, and to maintain a high level of exercise performance.

This site uses Akismet to reduce spam. Learn how your comment data is processed.

We use cookies on our website to give you the most relevant experience by remembering your preferences and repeat visits. By clicking “Accept All”, you consent to the use of ALL the cookies. However, you may visit "Cookie Settings" to provide a controlled consent.
Cookie SettingsAccept All
Manage consent

This website uses cookies to improve your experience while you navigate through the website. Out of these, the cookies that are categorized as necessary are stored on your browser as they are essential for the working of basic functionalities of the website. We also use third-party cookies that help us analyze and understand how you use this website. These cookies will be stored in your browser only with your consent. You also have the option to opt-out of these cookies. But opting out of some of these cookies may affect your browsing experience.
Necessary Always Enabled
Necessary cookies are absolutely essential for the website to function properly. These cookies ensure basic functionalities and security features of the website, anonymously.
Functional
Functional cookies help to perform certain functionalities like sharing the content of the website on social media platforms, collect feedbacks, and other third-party features.
Performance
Performance cookies are used to understand and analyze the key performance indexes of the website which helps in delivering a better user experience for the visitors.
Analytics
Analytical cookies are used to understand how visitors interact with the website. These cookies help provide information on metrics the number of visitors, bounce rate, traffic source, etc.
Advertisement
Advertisement cookies are used to provide visitors with relevant ads and marketing campaigns. These cookies track visitors across websites and collect information to provide customized ads.
Others
Other uncategorized cookies are those that are being analyzed and have not been classified into a category as yet.
SAVE & ACCEPT